The Consequences of Coronavirus Pandemic on the Global Economy

Covid-19’s spread has made national economies and businesses counting the costs, as governments struggle with pandemic measures to tackle the spread of the virus. Furthermore, despite the development of new and more advanced vaccines, many are still wondering what recovery could look like.

Big shifts in stock markets, where shares in companies are bought and sold, can affect the value of pensions or individual savings accounts. Furthermore, FTSE, Dow Jones Industrial Average and the Nikkei all saw huge falls as the number of Covid-19 cases increased in the first months of the crisis.

Moreover, the major Asian and US stock markets have recovered since the announcement of the first vaccine in November; however, the FTSE is still in negative territory. Besides, bellow you can see a selection of charts and maps that was taken from BBC in order to illustrate how the impact of Corona virus was on economy in different countries. 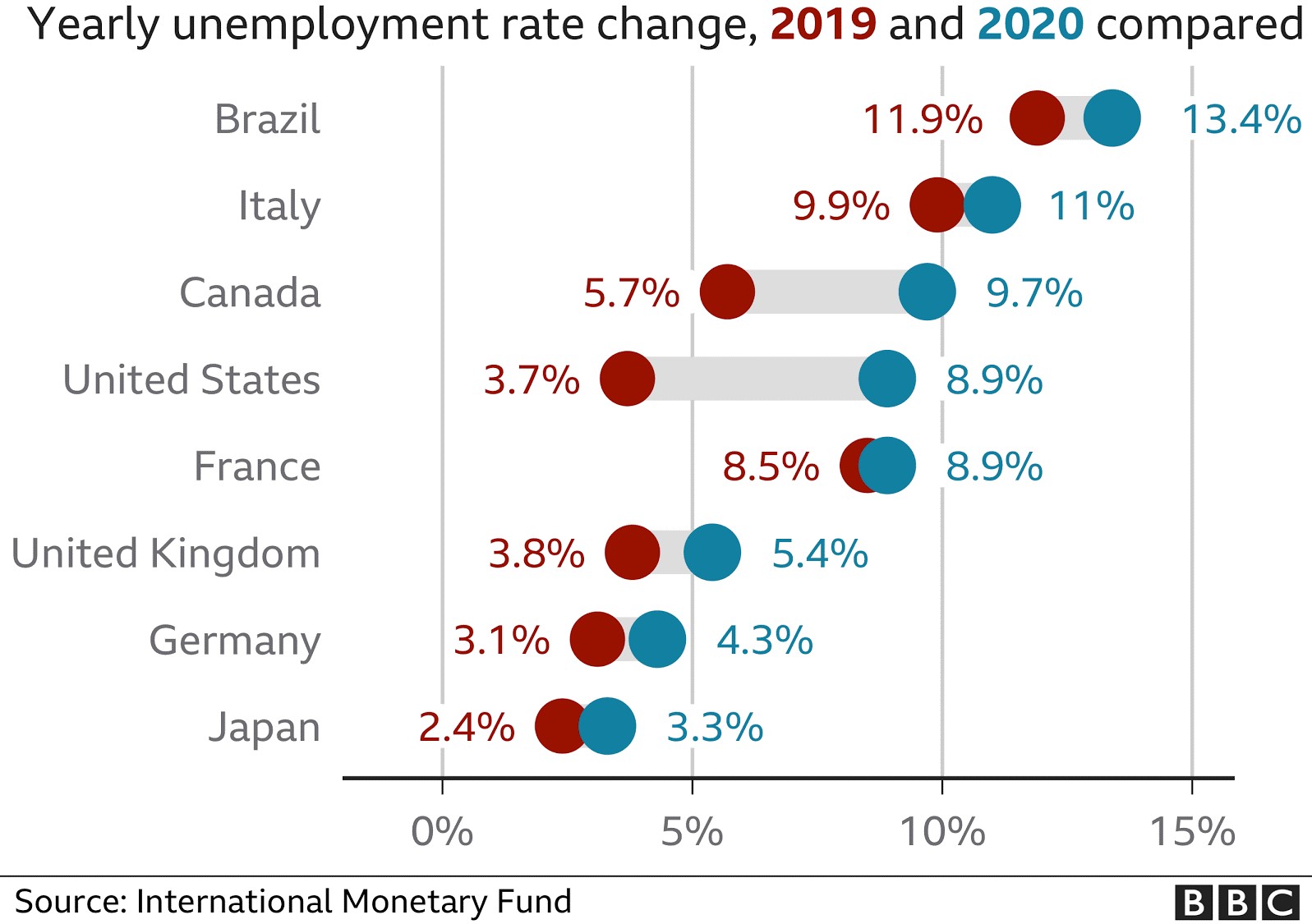 A difficult year for job seekers

Many people have lost their jobs or have experienced their incomes cut. Furthermore, unemployment rates have significantly increased across major economies. Moreover, in the United States, the proportion of people out of work has reached a yearly total of 8.9%, according to the International Monetary Fund (IMF), signaling an end to a decade of jobs expansion. In addition, millions of workers have also been put on government-supported job retention schemes as parts of the economy, such as tourism and hospitality, have come to a near standstill.

The numbers of new job opportunities is still very low in many countries. Job vacancies in Australia have returned to the same level of 2019, but they are lagging in France, Spain, the UK and several other countries in Europe.

Most of countries now in recession

As you may know if the economy is growing, that generally means more wealth and also more new jobs. It is measured by looking at the percentage change in gross domestic product, or the value of goods and services produced, typically over three months or a year.

Furthermore, the IMF estimates that the global economy shrunk by 4.4% in 2020. The organization also described the decline as the worst since the Great Depression of the 1930s.

In addition, the only major economy to grow in 2020 was China. It registered a growth of 2.3%. Besides, the IMF is predicting global growth of 5.2% in 2021. That will be driven primarily by countries such as India and China, forecast to grow by 8.8% and 8.2% respectively.

Ravel still far from taking off

Another industry that has encouraged many difficulties is the travel industry, which has been badly damaged, with airlines cutting flights and customers cancelling business trips and holidays.

Furthermore, the emergence of new variants of the virus - discovered only in recent months - have forced many countries to introduce tighter travel restrictions, which has more negative impact on travel industry and these are only some of the most crucial consequences of Covid-19 on the global economy and various industries.